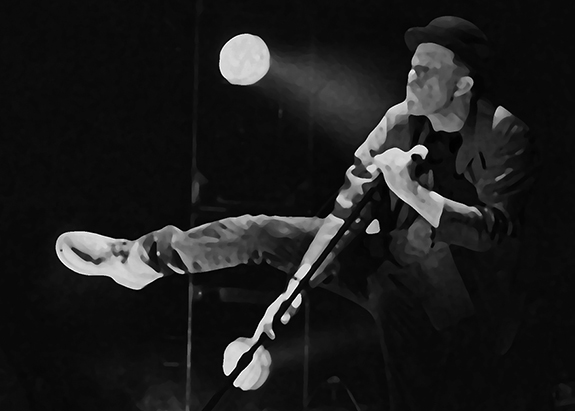 Just before we headed out on our East Coast ‘19 tour of Clap Hands: The Poetry and Song of Tom Waits, Robert Price of New Jersey Herald and I had a great conversation on all things Bovine and Waits. Here’s our complete uncut and unpublished candid exchange recorded on April 11th, 2019.

What is the origin and nature of your “love affair” with Tom Waits?

I’d heard some of Waits’ hits such as “Downtown Train” and “Jersey Girl” done up by Rod Stewart and Springsteen. So being a budding songwriter I went looking to see who this Waits’s kat was. And when I heard “Chocolate Jesus” I went down a hole, partly because I’m a recovering Catholic and even more so because Waits has all the shades of a sweating Pentecostal preacher, romancing the microphone with the hazards of sin and risks of salvation.

Is this a tribute show? Do you imitate Waits? Do you cover his whole career? And who plays Rickie Lee Jones? (just kidding)

Well, Bovine Social Club is an original project going on eight years now. But even if we’d wanted to pay tribute to Waits the man, or imitate him as you say, his complexity is daunting, not to mention his gravel and glitter. So that would have been foolish. What we did set out to do was take a journey into his lyric mind to see what we could find. We want to make his songs and poetry our own, to express what they mean to us, maybe even find something out about ourselves if we’re lucky. So it’s about the works of Waits rather than the man. The songs we’ve picked out will span his career and be woven together with Waits poetic tidbits and stories and stand on it’s own as the cohesive show Clap Hands. I have a crush on Rickie Lee Jones. 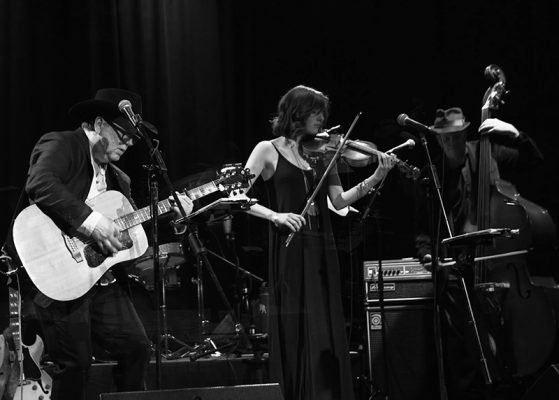 Who else is in the current band, and do they have affection for Waits as well?

On the way to Daryl’s House to play a brunch last fall, I asked our fiddle player Casey McGinty if she was up for putting her years of theater experience to use to put a dramatic Waits show together. We started meeting right away and throwing out ideas. Casey put some deep study into his works! We really wanted to jump out of our comfort zone and create an adventure. Waits music was just the thing! We’d done a couple sell-out Waits shows at the Deer Head Inn jazz club so we had that in our pocket. So I started hunting around for some players that loved Waits stuff. Our long-time bassist Ron Baumann jumped on board. Some ensemble regulars and new faces too. Performing with us at Roy’s Hall will be Waits devotees, Damian Calcagne on keys, Steve Shallit on guitar, and a very special cameo with Jesse Bardwell. Other shows on accordion will be the fantastic Tyrant Taylor Galassi of This Way to the Egress. 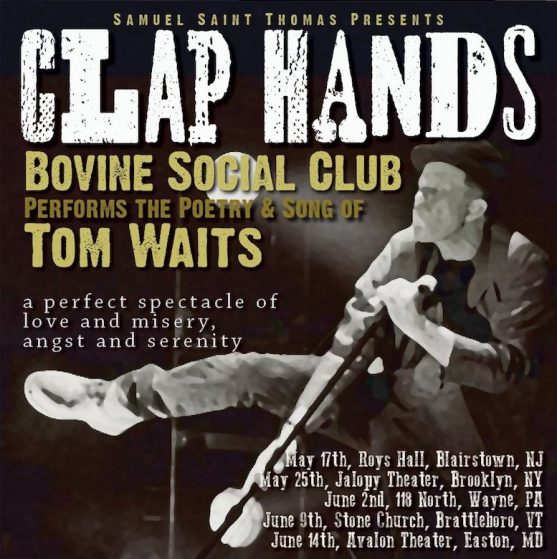 I know you’ve worked with Tim Carbone and have ties to RRE, but, briefly, where and when did the band get its start, and how has it evolved over the years?

While taking a break from a singing and songwriting career to pursue academics, I ran into my old drummer Jeff Barg at a birthday party. We got to talking and sooner than later we drew up a plan, ran adverts, spent 2011 in development with an ensemble, raised some money, hired Tim to produce our debut record, and off we went. Yes, Carbone produced our freshman CD and he and the late Andy Goessling sat in on our Live at Mauch Chunk Opera House release. Over the years the ensemble has continued to morph. As usual, things change. Life happens. People have kids, go back to school, move away. Then new and excited folks join in. But the vision remains; to write and perform music in a style informed by our common American folk traditions. 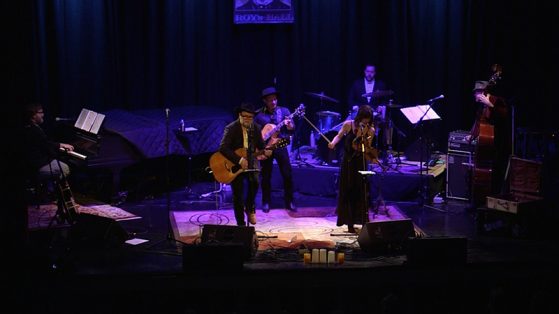 Besides Waits, who are your musical influences and why?

My Father and his secret love for Jelly Roll Morton plays like a soundtrack in my mind; the rhythm, the melody, and my Mother singing away. There must be an authentic story for me too. People such as Johnny Cash, John Prine, Willie Nelson, Townes Van Sant, Iris Dement, even church songs, old Irish ballades come to mind. You just wouldn’t join the Bovines unless you loved that stuff.

How much has living and working in or near NW Jersey, the Poconos and the Lehigh Valley contributed to your development as a musician?

It’s been tough going at times I must admit with very few listening rooms to go around. The folk audience is quite thin here these days. Oddly enough though, the Deer Head, a jazz club, has been home for us from the start, selling out over a dozen shows there. Besides that, it was either play bars or get out of town. We had to get out of town. With that though, it has been necessary to self-fund with things like our Patreon page. That support has given us the chance for some wonderful adventures from VT to VA.  We’re really quite happy to partner with the rare treasure Roy’s Hall to headline there for the first time!

Have you seen Tom Waits live? If so, what was your reaction? Ever meet him?

God would I love to see Waits, if I could be so lucky. A cup of coffee at a diner would be just as grand. A friend of mine claims to have met him. She also claims to have peed her pants.

If Tom Waits showed up at your gig, what would your reaction be?

In an effort to raise funds for struggling venues and to stay out of trouble during the pandemic, Samuel launched a virtual film tour of the Roys Hall concert in sixteen cities around the world! 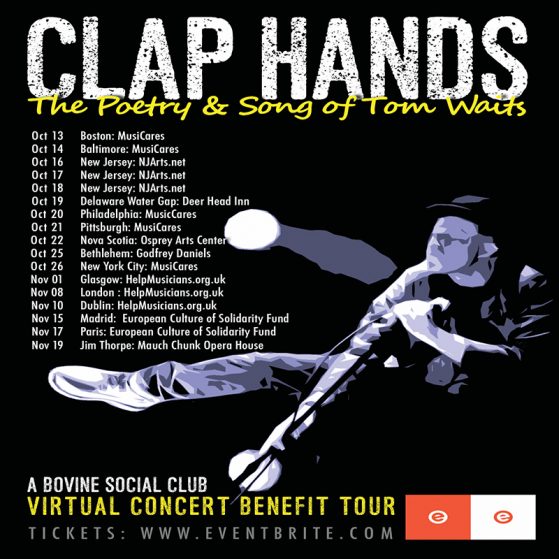